Reaugh (pronounced Ray) began sketching for amusement at an early age. His subjects were the open rangeland that surrounded the family homestead in Kaufman County, Texas and the free-roaming longhorn cattle found there.

His first formal art education came in 1884 when he attended the St. Louis School of Fine Arts. A few years later he attended the Académie Julian in Paris. When he returned to Texas in the summer of 1889, he immediately went out on a sketching trip.

The following year, he moved to Dallas with his parents and opened his first studio, the Ironshed. Over the next 20 years he exhibited his paintings across the U.S. including the Columbian Exposition in Chicago in 1893 and the Louisiana Purchase Exposition in St. Louis in 1903. Two of the 44 paintings sold at the Chicago Fair were Reaugh’s.

Reaugh really transitioned to primarily painting in pastels in the late 1880s. Pastels allowed him to capture the subtle shades of color he found in the landscapes and skies of West Texas and New Mexico and became characteristics of his work. His most famous works, the series of seven paintings entitled Twenty-four Hours with the Herd, are based on sketches made during the early 1880s on trips to the ranches managed by cattlemen Frank and Romie Houston.

More than an accomplished landscape and cattle artist, Reaugh was also an inventor and a photographer. He crafted his own pastels, drawing paper, and pastel board. He designed picture cases, a portable easel (1906), the moldings used to frame many of his paintings, La Cicada (the bus used on numerous sketch trips), and his second Dallas studio, El Sibil.

Reaugh was heralded as the “Dean of Texas Artists,” and his interest in art was lifelong. His sketching trips to West Texas were legendary, as was his influence as a teacher. He founded the Dallas School of Fine Art and continued teaching art classes and selling his paintings directly from his studio until his death in 1945. 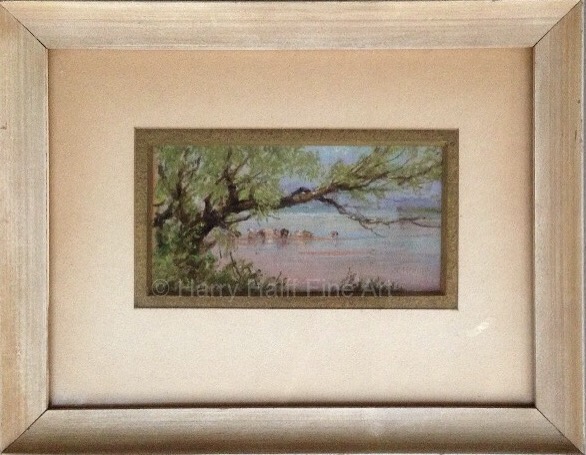 Watering at the River by Frank Reaugh

Do you have a Frank Reaugh painting you want to buy or sell? We specialize in Early Texas Art.